Although a crime may be committed against one or more persons, it is considered an injury to the public, the state, or society as a whole. That is why a criminal case will be called Regina v. Smith, for example. Regina means Queen, and the Queen is Canada’s head of state. 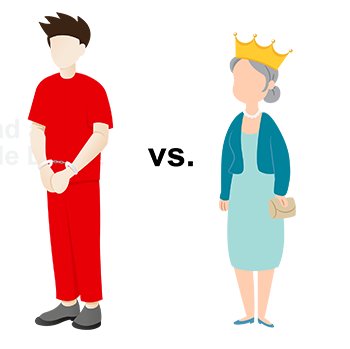 The accused can be self-represented, but are more often represented by criminal defence lawyers or “Defence Counsel” that they either hire privately or are provided for free by Legal Aid. Defence Counsel’s role is to advise and assist their client and ensure that their rights are protected.

Crimes are acts that break criminal laws. Criminal laws are written down in Canada’s Criminal Code, as well as some other laws like the Controlled Drugs and Substances Act. Examples of crimes include:

Criminal cases usually begin with a police investigation. If the police think they have enough evidence they will send the evidence to Crown Counsel. Crown Counsel will review the evidence and then decide if there is enough evidence. They will also decide whether it is in the public interest to pursue charges. If they decide to, the Crown “lays” charges against the accused (although in some provinces, the police are the ones who lay charges).

Someone accused of a crime risks gaining the stigma of a criminal record and possibly going to jail if found guilty. A criminal conviction can have a significant impact on the person’s life both in the short term and long term, as their freedom, job prospects, ability to travel and more may be affected. The type of punishment is determined by a judge and can range from a “discharge”, where the accused does not even receive a criminal record, to a fine, to community service, to jail. The maximum sentence in Canada is life in prison without a chance of parole for 25 years.

Most criminal cases are decided by a judge alone. However some more serious criminal cases may have a group of members of the public called a “jury” as well a judge making decisions. In criminal jury cases, the jury will decide whether to find the accused guilty, but a judge will decide what the punishment will be and what evidence the jury is allowed to hear.

Criminal convictions are very serious because it could involve taking away someone's freedom. Even if someone is not sent to jail, the stigma of a criminal record can seriously affect their life. To make sure no one is convicted of crimes they did not commit, there are number of safeguards, including: 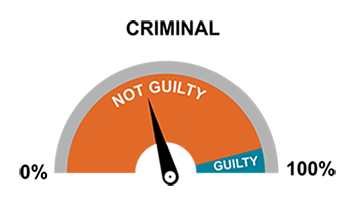